Human Rights, Oligarchs and Social Movements according to Mikael Danielyan 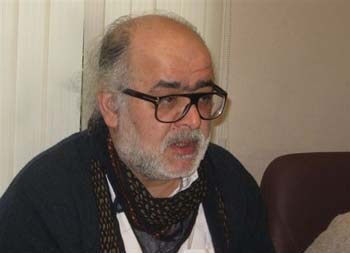 The Head of “Helsinki Association” Mikael Danielyan in the interview with Epress.am mentioned several reasons why the organization did not apply to court against NA deputy and businessman Ruben Hayrapetyan, who attacked human right defender Arman Veziryan. The incident occured prior to the protest in front of the “Harsnakar” hotel complex which belongs to Ruben Hayrapetyan and in which on June 17th four medical officers had been severely beaten, one of which-major Vahe Avetyan- died 12 days later. After the incident Ruben Hayrapetyan called Arman Veziryan and expressed his apologies.

According to Danielyan's words, among the witnesses of the incident there were no civilians - only Deputy Chief of Police Robert Melkonyan and State Protection Service (SPS) regiment commander Valery Osipyan were present. Besides, there were no signs of violence on Veziryan's body and the forensic examination would give no results.


“Another reason is that Arman Veziryan has appeared in a similar criminal case where he turned into an accused from the suffered. We have all the basis to suppose that the policemen would say in their testimonies as if Veziryan himself provoked the attack of Ruben Hayrapetyan,”- Danielyan mentioned.

According to the words of human rights defender, the decision not to apply to the Court against the deputy R. Hayrapetyan, was made at a general meeting of the organization.

“Veziryan has realized so helpful and beneficial activity during whole these years, that all of the recent social movements taken together have not realized even half of what Arman Veziryan has. And Hayrapetyan most probably has been explained whom he was dealing with,”- told Danielyan.

Danielyan emphasized that after the incident and also up to the incident Hayrapetyan talked with the journalists in an insulting manner and these journalists were not joined in a protest movement. “Why won't they raise a noise? Why are they silent? Are they waiting for us to do everything instead of them? Let them use their heads and take some brave step. We have forced Hayrapetyan apologize with our years of working. Why shouldn't they try the same? The thing is that in case of them no one apologizes. They were cursed and were acted even worse by the same Ruben Hayrapetyan. And what was their reaction? They were laughing at the press conference”.

Talking on the critical attitude addressed towards Helsinki Association according to which the human rights defenders “have forgiven the oligarch and missed the opportunity for depriving Ruben Hayrapetyan of power,”- Danielyan announced; “Helsinki Association activity have never been directed to any political power's satisfaction of interests- be it governmental or oppositional. Especially when it concerns to the interests of obscured movements and initiatives.”

Furthermore, Danielyan questioned the appropriateness of the requirements put forward by the initiatives.

“The actions of the so called public movements are absolutely unclear to me. How for example the requirement has emerged to deprive Ruben Hayrapetyan of the post of president of Football Federation. Some people motivate it by the fact that RA Football Federation is considered to be the “face” of the country. Just as well the leader of “Prosperous Armenia” Gagik Tsarukyan heads the National Olympic Committee. So what? Haven't his bodyguards beaten anybody? And doesn't Serzh Sargsyan lead the Chess Federation? And haven't his guards or power structures killed people? They have killed, they are killing and they will. Why wouldn't they touch the Olympic Committee? After all there are olympic champions there and Tsarukyan may spread this movement on asphalt, right?”

According to the words of Danielyan, all the recent public movements do not inspire confidence; starting with the defence of Mashtots Park up to the cutting of tress and boutiques. “They rush from side to side, and then the fashion to lighting of candles started. And haven't people died before that? Recently, for example, Vram Baghdasaryan received 14 years for a murder which he hadn't committed. Let everybody go to the house of Vrm Baghdasaryan with candles. The soldiers constantly die in the army.  So what? Do they come out to street after each death? I don't believe that those movements will be consecutive in their activities. They used to say that if we didn't protect Mashtots park, then we did not protect human rights. We have been defending human rights for 15 years, about which they don’t even have any idea,” – Danielyan told.

Turning to the question of public activity on Vahe Avetyan’s death, the human rights defender mentioned that here also existed a lot of inexplicable phenomena. “This is not a social movement. It involves political forces. The same was observed in the protests of Mashtots Park with the appearance of “disassembling groups”. Our position remains unchanged; if human rights are violated and they turn to us we defend them. But there were cases during Mashtots Park movement when the rights of the participants were violated and they came to us and then suddenly disappeared.”

Human rights defender drew attention to the fact that under the requirement of extraordinary session of parliament on Ruben Hayrapetyan's mandate withdrawal, Tigran Urikhanyan from “Prosperous Armenia” Party also participated in the signature collection, who shot from a gas pistol on Mikael Danielyan on 2008.

“At that time this man acted the same way as Ruben Hayrapetyan's bodyguards and escaped punishment. Now he has appeared in the role of  a “champion of justice”,- Danielyan noticed.

Answering the question about who profits from the manipulations of public movements, Helsinki Association Chairman said that destabilization is advantageous to everybody including the authorities which have the chance to “tighten the screws” more easily. “It is necessary to understand that human rights violations in Armenia starts not from Mashtots Park and Vahe Avetyan’s death. Human rights violation in Armenia has started much earlier, when all were silent. A social movement should be principled, permanent and should not appear from time to time,” – concluded Danielyan.