Days in Northern Avenue since 21 March 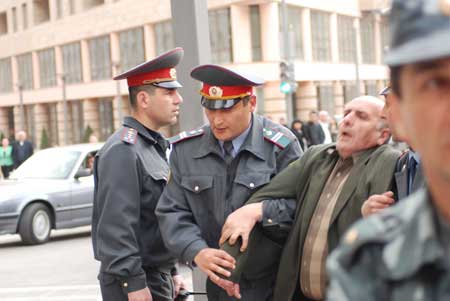 On 20 March the state of emergency declared by the president of Armenia Robert Kocharyan was over. Since 8 March the opposition applied to the Mayor’s Office of Yerevan to hold a rally on 21 March, however, the application was denied. On 18 March the president of Armenia signed a decree on making changes into the law on conducting assemblies and demonstrations adopted by the National Assembly of RA on 17 March. As a result of the changes made into the law on assemblies it was impossible to hold such public events at request.

Since 19 March an announcement to hold a peaceful demonstration was broadcast by various means of communication (sms, e-mail, blogs). It should be an action to assist the arrested opposition supporters, as well as to express sorrow the dead of 1 March.
The demonstration should start at 17:00, however, the Liberty Square had already been cordoned off by the police who carried batons and shields. The demonstration started from Northern Avenue and ended at the Embassy of France. There were people with candles and pictures of arrested supporters of opposition. Peaceful demonstrators were surrounded by the police. The groups of internal troops of the police carrying electroshocks and weapons with gas cylinders were also there. A clash took place between the policemen and some of the peaceful demonstrators; as a result the policemen used batons and electroshocks against them to disperse the demonstrators. Several people were arrested during that peaceful demonstration as well. At the same time a water-jet car and a car with barbed wire had been seen near the house of National Assembly of RA. 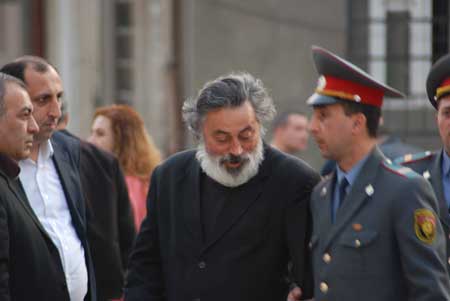 Permanent actions of peaceful protest, which are as well called Democratic Walks, continue. Every day from 18:00 to 20:00 citizens who protest against the arbitrariness of authorities of Armenia come to the Northern Avenue. In general nearly 2-3 thousands of people gather there. This action of protest started after the day of Peaceful Protest of 21 March, on the following day of the end of the emergency state declared by the president of Armenia on 1 March.
The police did not arrest any person during the first 2 days, but on 25 and 26 March there were already 7 and 54 arrested people respectively, the majority were women.
Lyudmila Harutyunyan, the chairman of Social-Democratic Party “Hnchak” was among the arrested ones. All of them were taken to the Police Department of Kentron District, Yerevan and later there were taken to the police departments of their places of residence. Tatul Mkrtchyan, the member of the Conservative Party of Armenia stated: “My friend and I were arrested at 18:10. Two policemen came up to us from behind and took us to the police car. One of the policemen standing near that car cried out loudly at the journalists: “Both of them are one of the organizers of the rally hold on 1 March near the Embassy of France”. He did so in order to prove our arrest at least legally. 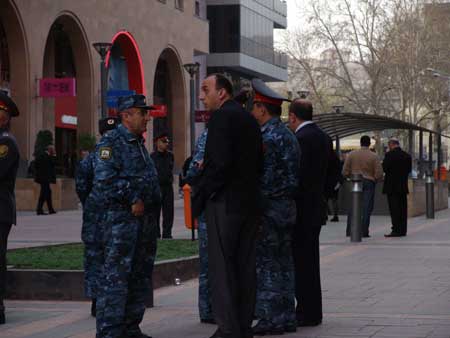 When we were taken to the Police Department of Kentron district, there were already 40 people there. They asked our names, surnames and addresses and kept us there till 20:50, and only then they took us to the police departments of our places of residence. 8 persons were taken to the Police Department of Nor-Nork district. I was among them. At 01:20 I was taken to the room of the chief of the department of criminal investigation. His surname is Karapetyan. Our conversation lasted 15-20 minutes, during which he persuaded me not to participate at any act of protest. Hearing my flat refusal he released me. They did not draw up a report on my arrest”.