Case of Arshaluys Hakobyan, a press photographer of website and monitor of Helsinki Association 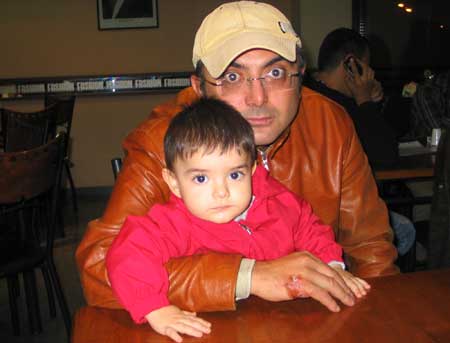 Arshaluys Hakobyan, the member of Helsinki Association, the press photographer of the official web site of the organization(www.hahr.am) was arrested on 5 June, 2009. On 31 May, 2009 he participated at the elections of the Mayor of Yerevan as an observer representing Helsinki Association. An accusation was brought against him according to Article 316, part 1 of the Criminal Code of Armenia (Showing Resistance against the Law Enforcement Bodies).


On 31 May, 2009 A. Akobyan, together with the group of observers representing Helsinki Association, visited the polling station No. 8/23 of Malatia-Sebastia district, Yerevan. The members and the head of the electoral commission prohibited them to carry out the monitoring process. The observer group was taken out from the polling station, and the door was locked. Afterwards, they were warned about physical punishment.
Regarding the above mentioned incident A. Akobyan made a statement addressed to the Special Investigation Department of the Office of Prosecution General of Armenia.
In the morning of 5 June, 2008 he was called and asked to visit the Investigation Department in order to give testimonies. A. Akobyan refused going there and told them that he would visit the Investigation Department only in the presence of official summons. Later, two policemen visited A. Akobyan at his place, went to the bedroom, woke him up and handed the summons to him. There was nothing written about the person who called A. Akobyan to visit the Investigation Department, there was nothing about the criminal case, it was not even signed and moreover, the status of A. Akobyan was not mentioned on the summons. 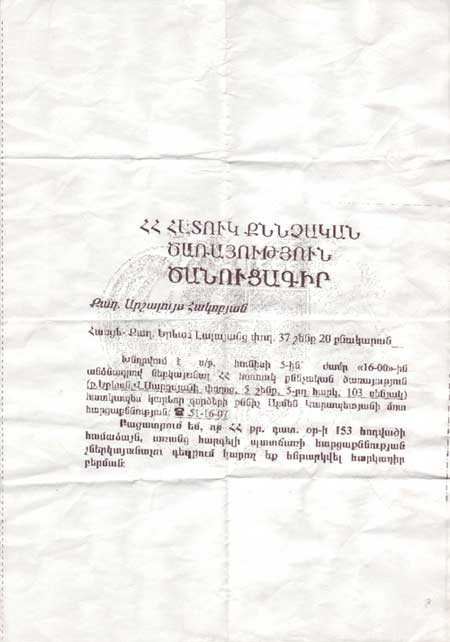 A. Akobyan refused to sign the paper and stated that the paper was an illegal one. The Police officers forced him to sign the “summons”. After a long “pressure” A. Akobyan signed the “summons” in a wrong place as he did not wear his contact lens at that moment (A. Akobyan has poor eyesight). The police officers were indignant with him and continued exerting pressure on A. Hakobyan. He demanded the police officers to leave his house. The police officers asked for reinforcement from the police and took him to the police station by force. A. Akobyan underwent beatings and inhuman treatment in the Police Department of Kentron District, Yerevan. Then they put handcuffs on his hands and took him to the Investigation Department of Kentron district. A suit was brought against him according to Article 316, part. 1 of the Criminal Code of Armenia in the Investigation Department of Kentron district. After being questioned in the Investigation Department, A. Akobyan was taken to the pre-detention cell.
On 6 June in the evening the Court of the First Instance of Kentron and Nork-Marash districts, Yerevan decided to grant the motion of investigators and chose the arrest as his preventive punishment.
0
0
0
s2sdefault