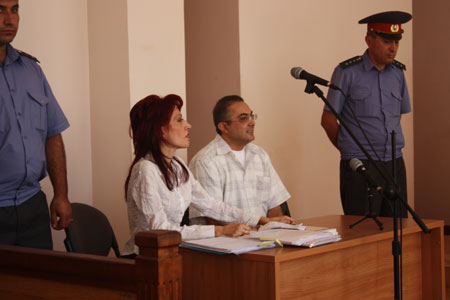 On October 6, 2009 the trial of Arshaluys Hakobyan, the monitor of Helsinki Association and human rights defender went on at the Court of First Instance of Kentron and Nork-Marash district. A. Hakobyan is accused of Article 316, part 1 of the Criminal Code of Armenia (defense attorney- G. Khachatryanm judge- G. Avetisyan, prosecutor H. Babayan).
According to the petition filed by G. Khachatryan, the Court demanded the Police Department of Kentron districts to provide information about the exact time of A. Hakobyan’s arrival to the Police department. According to the information A. Hakobyan was brought to the Police department at 14:30 pm, while the time was mentioned as 13:00 and 14:30 pm in the materials of the criminal case. Besides, the case materials bear the information that A. Hakobyan was subjected to the test of alcohol at 13:59 pm. During the trial A. Hakobyan showed the court his pictures showing signs of abuses in different parts of his bodies. Regarding the pictures the judge to the case G. Avetisyan said that maybe the head bearing signs of abuses was not at all the head of A. Hakobyan.
The trial was postponed till October 16, at 12:00 pm. The prosecution and defense sides will introduce their speeches.