The Prosecutor declined the charge 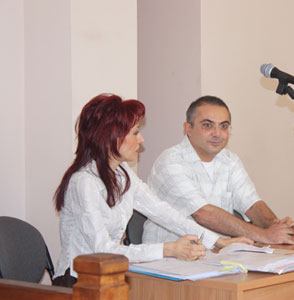 The Prosecutor declined the charge
On February 05, 2010 the trial of Arshaluys Hakobyan, monitor and human rights defender of Helsinki Association continued at the Court of First Instance of Kentron and Nork-Marash districts of Yerevan (defense attorney is G. Khachatryan, judge is G. Avetisyan, and the prosecutor is H. Babayan). The trial has been delayed for 3 month according the motion of the prosecution side reasoning it that the charge against A. Hakobyan is subject to change. On February 05, 2010 the prosecutor declined the charge brought against A. Hakobyan on the ground of lack of evidence. According to it the Court found A. Hakobyan innocent of crime and acquitted him.
A. Hakobyan was arrested on June 05, 2009 and was detained for 4 months. He was charged by part 1 of Article 316 of the Criminal Code of Armenia (Violence against the representative of authorities).