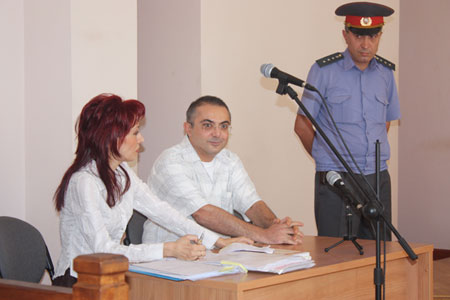 On September 15, 2009 the trial of Arshaluys Hakobyan, the monitor and human rights defender of Helsinki Association started at the Court of the First Instance of Kentron and Nork-Marash districts of Yerevan.
A. Hakobyan is accused of Article 316, part 1 of the Criminal Code of Armenia. The accusation is based on the testimonies of 4 policemen.
According to the testimonies of those policemen on June 05 they visited A. Hakobyan at his apartment in order to give him the summons, but the latter was drunk, used bad words towards them, then he signed the paper on the wrong place and afterwards hit them. As a result two policemen came to help their collogues and accompanied him to the police department. According to the policemen testimonies they did not hit A. Hakobyan. A. Hakobyan in his turn requested them to give answer to the questions regarding the bumps on his head. The policeman Vahe Badalyan answered that A. Hakobyan’s may hit his head on the car door. Also, he mentioned that A. Hakobyan had fallen on the ground when he was getting into the car. It is worth mentioning that the testimonies of witnesses differ from each other, for example in which direction A. Hakobyan threw the cigarette, whom he hit and especially which kind of expression he used.
Regarding the case of A. Hakobyan the doctor of Ambulance Artem Petrosyan also gave testimonies. According to the case materials on alcohol test of A. Hakobyan, he had the 3rd level of drunken state. However, the doctor did not know either the victims or A. Hakobyan.
The testimonies of Aram Hovsepyan had differences regarding the time. That’s why defense attorney Gayane Khachatryan filed a petition to prepare a letter of inquiry about the hour that the alarm went on in the police department. The judge satisfied the petition filed by G. Khachatryan.