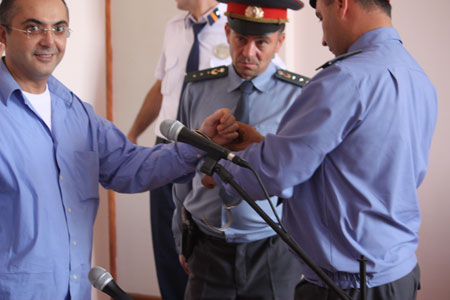 On September 23, 2009 the trial of Arshaluys Hakobyan, the monitor and human rights defender of Helsinki Association continued at the Court of First Instance of Kentron and Nork-Marash districts, Yerevan. He is accused of Article 316, part 1 of the Criminal Code of Armenia. The defense attorney to the case is G. Khachatryan, the judge to the case is G. Avetisyan, the prosecution party represents H. Babayan.
During the trial Samvel Harutyunyan, the official of the Central Police Department again gave testimonies, which contradicted both the testimonies of victims and the testimonies he gave during the pre-investigation stage. During the trial he stated that he did not see how A. Hakobyan hit or threw a cigarette at the policemen, also he told the court that he did not witness any strange scene when they entered A. Hakobyan’s apartment. According to the policemen testimonies they visited A. Hakobyan at his place on June 05 to give him the summons, afterwards he hit them. As a result two policemen were called and they took him to the police department.
Next hearing is to take place on September 28, at 15:00