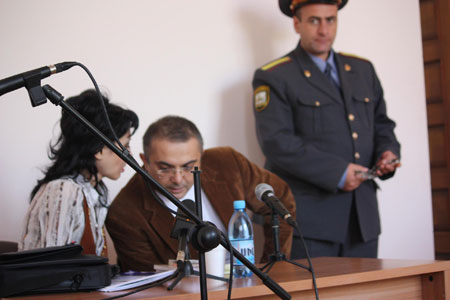 On October 16, 2009 the trial of human rights defender and monitor of Helsinki Association Arshaluys Hakobyan continued at the Court of the First Instance of Kentron and Nork-Marash districts (defence attorney- G. Khachatryan, judge- G. Avetistan, prosecutor- H. Babayan). Prosecutor H. Babayan filed a petition to the Court to postpone the trial for a month. He considers that the charge against A. Hakobyan was subject to change, also he filed a petition to Court to change the precautionary measure and choose another measure: a signature to not leave his place.
The Court granted the petition. The trial will be held on November 20, 2009 at 10:00.
Arshaluys Hakobyan is accused of Article 316, part 1 of the Criminal Code of Armenia (Violence against the authority representative).