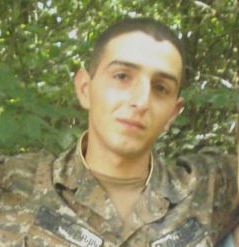 According to court records, the ordinary soldiers of mandatory military unit 54809 Benik Hambardzumyan June 28, 2011 at 6: 30 am involuntarily left the military unit. During the search at 1: 15 pm on June 29, 2011 Tigran Hambardzumyan was found dead in the forest, about 100 meters away from the unit.


The preliminary investigation so far works only on the false hypothesis that the deceased had homosexual tendencies, which are absolutely refuted by the data obtained in the same criminal case, which clearly shows that Tigran Hambardzumyan did not commit suicide, but was murdered.
The specific items which were taken during the investigation from the crime scene for further examination draw a lot of questions to R. Martirosyan who is T. Hambardzuyan’s legal representative. R. Martirosyan expert of the Helsinki Association of Armenia tried to get this information from the Head of Civil Service of the Defense Ministry and Military Prosecutor G. Kostanyan and A. Harutyunyan during the meeting in Goris, Armenia.

No. 610/19 forensic expert opinion showed that the incidence of alcohol use before Hambardzumyan was injured in the incident, but the investigating authority does not want the investigation to clarify the circumstances of this case.
In the case of posthumous forensic examination prove that the investigative body specified circumstances T. Hambardzumyan could not commit suicide. The fact that «Рапира» (type of razor), which was found at the scene and the allegedly suicidal fingerprints were found completely false version of events put forward by the depreciation of the investigative body.
So far no arrests have been made in the case nor has anyone been charged on the basis of murder or as an article in the suicide.

The preliminary investigation ended in deadlock, while systematically denies the plaintiff's objection to the prosecutor's office and the investigative body motion, so that the case can be given to another investigative body.
The investigating authority is not willing nor able to uncover the reasons for his murder and false hypothesis. As a result, the case has reached a dead end.
0
0
0
s2sdefault