Written by Arman Veziryan on 03 August 2012. Posted in Freedom of Assembly 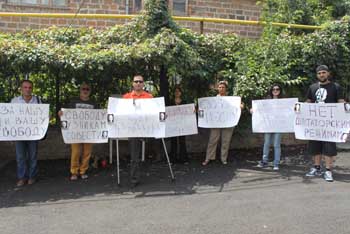 Today at 12:00 devoted to the International Day of Solidarity with the Civil Society and Human Rights Protection Movements in Belarus an action was realized in front of Belarus Embassy in Yerevan in defense of “Viasna” Human Rights Center Leader and International Federation for Human Rights (FIDH) Vice-President Ales Bialiatski.
Among the participants of the action were representatives from “Helsinki Association” human rights protection organization and “Rule of Law” human rights protection non-governmental organization.
From the local media “Aravot” (www.aravot.am ), “Armenia” (www.armenia.tv ) and “PanARMENIAN.Net” (www.panarmenian.net ) were present. 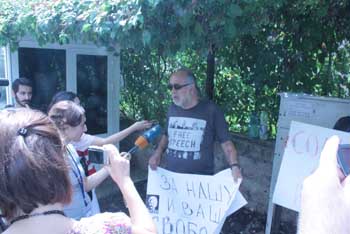