Written on 14 January 2011. Posted in Freedom of Conscience 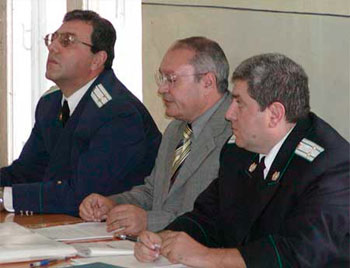 Nowadays Armenia is one of the leading countries…in terms of the number of conscientious objectors it has. We may well fall behind China or, say, Myanmar in this respect, but the population of these countries is “somewhat” larger than ours, plus the authorities there do not get furious in trying to persuade the world community of their adherence to democratic values.

Eighty-two persons belonging to Jehovah Witnesses religious group are currently detained in Armenia. Seventy-two of them are already serving their prison terms for evasion from military service as provided by Article 321 of the Criminal Code of Armenia. This runs counter to the PACE Resolutions on Armenia, which clearly state about the inadmissibility of deprivation of liberty for a refusal to enroll due to religious convictions. Moreover, upon accession to the Council of Europe Armenia undertook to release from prison all “the evaders” and to adopt a law on alternative service in line with the corresponding international standards. Such a law has not been adopted yet. To be correct, there is a law, but it is far from those international standards, let alone corresponding to them.

On 28 September the President of Armenia ruled on initiation of regular compulsory and alternative military service conscription due in autumn. As Jehovah Witnesses refuse to join an alternative service, which is performed under supervision of military police and draft-offices, there is no doubt that they soon will join the rows of conscientious objectors. There are also many young men who simply refuse to join the army. There are plenty of reasons, such as unwillingness to serve in Nagorno Karabakh, “dedovshina”, fear for being physically and morally mutilated. By no means can they choose the alternative service as it is for those representing religious associations only. The only thing left for them is to escape. Many of them are “on the run” for several years. Criminal cases against them have already been filed and even a decision on detention on remand has been issued.

It is right here that GOOD MAN PROSECUTOR shows up. On 15 October, the Prosecutor General, A GOOD MAN, instructed his departments to discontinue criminal prosecution of those who voluntarily appears at draft-offices willing to enroll for military or alternative service. The Prosecutor General seems to have forgotten that he represents the authority, one of its branches, and that it is right him that the PACE resolutions are addressed to. There resolutions all clearly say that conscientious objectors must not be imprisoned. Surely the Prosecutor General has also forgotten about those already convicted. There’re not so many – eighty-two only. Still... I just wonder: has this issue been addressed during a recent meeting between GOOD-MAN Prosecutor and the Commissioner on Human Rights of the Council of Europe? If yes, what kind of agreement did the “High Parties” reach? Why does the Council of Europe keep silence as the Armenian authorities show their devil-may-care attitude towards the requirements of the PACE resolutions?

The GOOD MAN did not forget to issue a heart-breaking, tear-dropping slogan: “The Prosecution calls on the parents of the draftees to contribute to returning their sons from abroad, their spiritual and physical growth, so that after demobilization they could honorably work and create on their native land”.

At the end I would like to mention something similar to the notion of “take up the receiver and inform the police” – in order to obtain necessary information and support from the GOOD MAN, please “inform” by the following phone number: 583281.