Written by Gayane Khachatryan on 28 July 2015. Posted in Courts 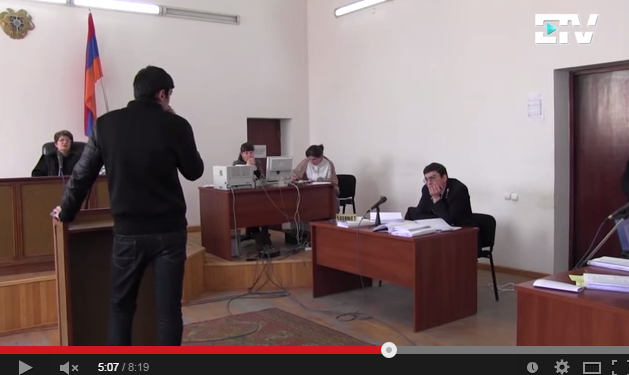 Criminal trial of Karen Kungurtsev (Section 1 to Article 34-104 of the Criminal Code of the Republic of Armenia) started on October 21, 2014 at the Lori District Court of First Instinct. K. Kungurtsev is charged with attempted murder of Davit Hovakimyan. Arayik Papikyan, from the Helsinki Association for Human Rights, is the defendant’s lawyer.


To recall, on October 12, 2013, a 15 year old boy from Yerevan went to Vanadzor with his handball team and was stabbed in the chest during an argument that occurred after the game. The police arrested Karen Kungurtsev and charged him for Davit Hovakimyan’s murder. According to the accused, he was beaten and tortured while in police custody.
Karen’s trial has been ongoing for almost a year. Recently, his case was postponed three times for various reasons. His last court session was on Tuesday, July 21, where two witnesses testified about what happened the night Davit was murdered. During previous court sessions, a couple of witnesses recanted their initial testimonies, stating that police officers coerced them into giving false testimonies accusing Karen. Therefore, it did not come as a surprise when 15 year old R.S. renounced his initial testimony in court on Tuesday. The witness was very nervous and hesitant when answering the Judge’s questions. His testimony was interrupted twice since he was not feeling well. However, he testified that Karen was not at the scene of the crime and does not know who stabbed Hovakimyan. The witness, who was only 13 at the time, was held in police custody for two days without the presence of his parents. During police questioning, the investigators showed the witness four pictures, one of whose was Karen. The police asked if he recognized Karen and the witness stated that he couldn’t remember, so the police said it must be him (Karen).
The witnesses initial testimony was very specific and detailed. He had included the color and size of the knife, who was holding it and where Davit was hit. The Judge asked the witness how he was able to give such a detailed statement if he wasn’t present during the fight. After a few minutes of silence, the witness responded, stating that police officers told him that everyone was testifying against Karen so the officers wrote his testimony for him and then he signed it under pressure.
The prosecutions case rested on R.S. testimony, since the teenagers statement was the main piece of evidence used to charge Karen with murder. Therefore, the defendant’s lawyer, Mr. Papikyan, stated that this witnesses testimony along with the rest of the examinations, testimonies, and material evidence indicates that Karen Kungurtsev was not at the scene of the crime and did not stab the victim. The next hearing is set for August 5 and the lawyers believe that the prosecution will drop the charges.