The Court Condamned Hrachya Gevorgyan for 8 Years of Imprisonment

Written by Gayane Khachatryan on 30 November 2015. Posted in Courts 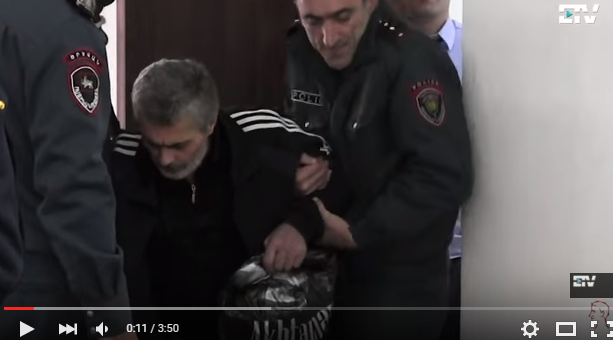 After the sever health damages of the defendant, the case of Hrachya Gevorgian in the Court of First Instence of Ajapnyak and Davtashen District is restarted.
The Court’s decision to restart the examination was based on the mediation of the prosecutor, who mentioned on the fact that during the trial the laser storage containing confirmative video about  the claim against H. Gevorgyan on the basis of 316 Article of Criminal Code of Armenia, was not examined.


On November 9 of this year, the Court made a verdict recognizing the guilt of Hrachya Gevorgyan, but before mentioning the final part of the decision, the proof (video) provided by prosecutor was examined, which didn’t prove the fact the H. Gevorgyan’s resisted police officers. And after restarting the examination of the case, it was found out and stated that the storages (drives) of the trial protocol containing the records of witnesses’ testimony on the benefit of the defendant were disappeared from the Court. And it also shall be mentioned that the Court didn’t reorganize a new testimony of the witnesses after restarting the trial. The victim, who was the civil wife of the defendant, had never appeared for the trial. However, ignoring all the facts above, the Court still found the claim against H. Gevorgyan justified and condemned him to 8 years of imprisonment. After listening the verdict, the defendant tried to commit a self-immolation with the petrol brought by him in advance, but the concomitant policemen prevented that.
It shall be mentioned that H. Gevorgyan has been under arrest since 2011 and his health state is still heavy. He is not able to walk without assistance and there are still difficulties while speaking, but the PI (penitentiary institution) does not undertake any means to improve the ongoing health state of the defendant.
Well taking into consideration all the stuff mentioned above, couldn’t we indicate a violation of the principle of publicity examination of the case during trial process provided by Article16 of Criminal Procedure Code of Armenia?
Article16. Public Trial
1.      Trial shall be public.
2.       Trial in camera is held, in cases and in the manner prescribed by law, shall be held only upon a court decision, for the purpose of protection of public morals, public order, state security, and the private life of the parties, as well as the interests of justice. The court verdicts and final decisions in all cases are announced publicly.
Particularly, it is about the right to access and availableness of the information of the criminal case and the public examination of the information.
The other one is the presumption of innocence indicated in the Article 18 of the Criminal Procedure Code of Armenia, which states that:
1.      Every person suspected in or charged with a criminal offense shall be presumed innocent unless proved guilty in the manner prescribed by this Code and unless the verdict comes into legal force.
2.       The suspect or the accused is not obligated to prove his innocence. The obligation to prove the innocence of the suspect or the accused cannot be imposed on the defense party. The obligation to prove the charges and to disprove the arguments brought in favor of the suspect and the accused lies upon the prosecution.
3.       No conclusion that a person is guilty of a crime can be based on suppositions, and such conclusion has to be supported by sufficient combination of reliable and compatible evidence [cumulative evidence], which is relevant to the case.  (not official copy)
4.      All doubts concerning the charge to be proved, which cannot be eliminated through a due process of law in accordance with the provisions of this Code, are interpreted in favor of the accused and the suspect.